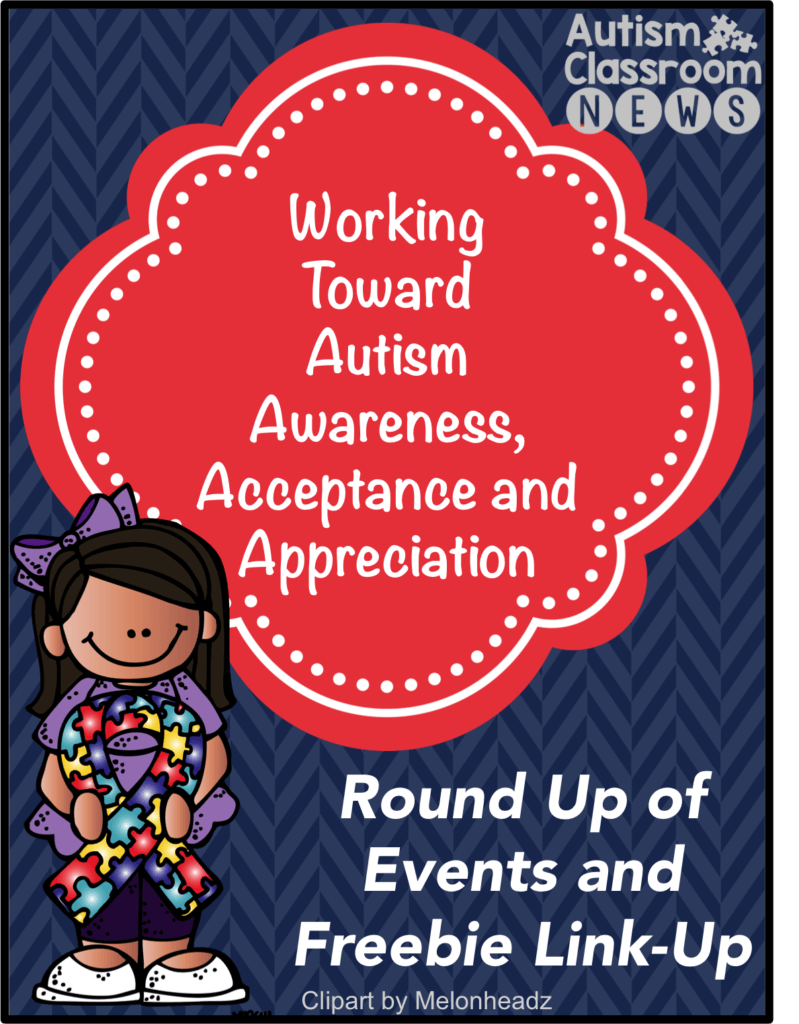 As promised I am back to ring in Autism Month.  If you check out last year’s post, you will find lots of statistics and details about autism itself.  You will also find social media pictures that you can use on your Facebook, Instagram etc. to show your support for autism.  Since I’ve covered all of that last year, I didn’t want to cover the same material.  Because let’s face it, if you have already found the blog, and probably if you are new to the blog, you probably already know what autism is.

It’s interesting, because we still call April Autism Awareness month, but really I rarely meet a person anymore who doesn’t know about autism.  That’s a big difference than when I started in this field.  When I first started consulting and traveling, I spent a good bit of time on planes.  People would frequently ask me what I did for a living.  When I told them I worked with kids with autism, I usually got a reply like, “Oh, I love art!” because autism wasn’t a common word.  Now, people ask me what I do and I find myself (after  long week of consulting) telling them that I teach graduate school in education.  Not because they don’t know about autism, but because everyone has some experience with autism and sometimes I’m just too tired to hear it on the plane.  🙂 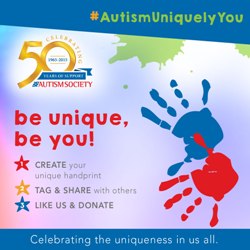 But did you know that in 1985 the Autism Society of America worked with Congress to establish the first Autism Awareness Week that took place in April?  [source]. Yep, blue and World awareness are newer on the scene but the recognition of a time to build awareness of autism has been around for a while.  The Autism Society is celebrating its 50th Anniversary.  It held the first conference focused on autism in 1969!  And has a long history of including individuals on the spectrum in decisions about the organization and their efforts.  Temple Grandin joined the Board of Directors in 1988.  In the late 1990s when individuals on the spectrum really began to gain a voice, a common refrain was “Nothing About Us, Without Us.” [source]  One of the things I really appreciate about the Autism Society is their efforts to include everyone involved with autism from individuals on the spectrum, their families and professionals who work with them in decision making.  It’s usually not an easy task, but together we have so much to teach each other. 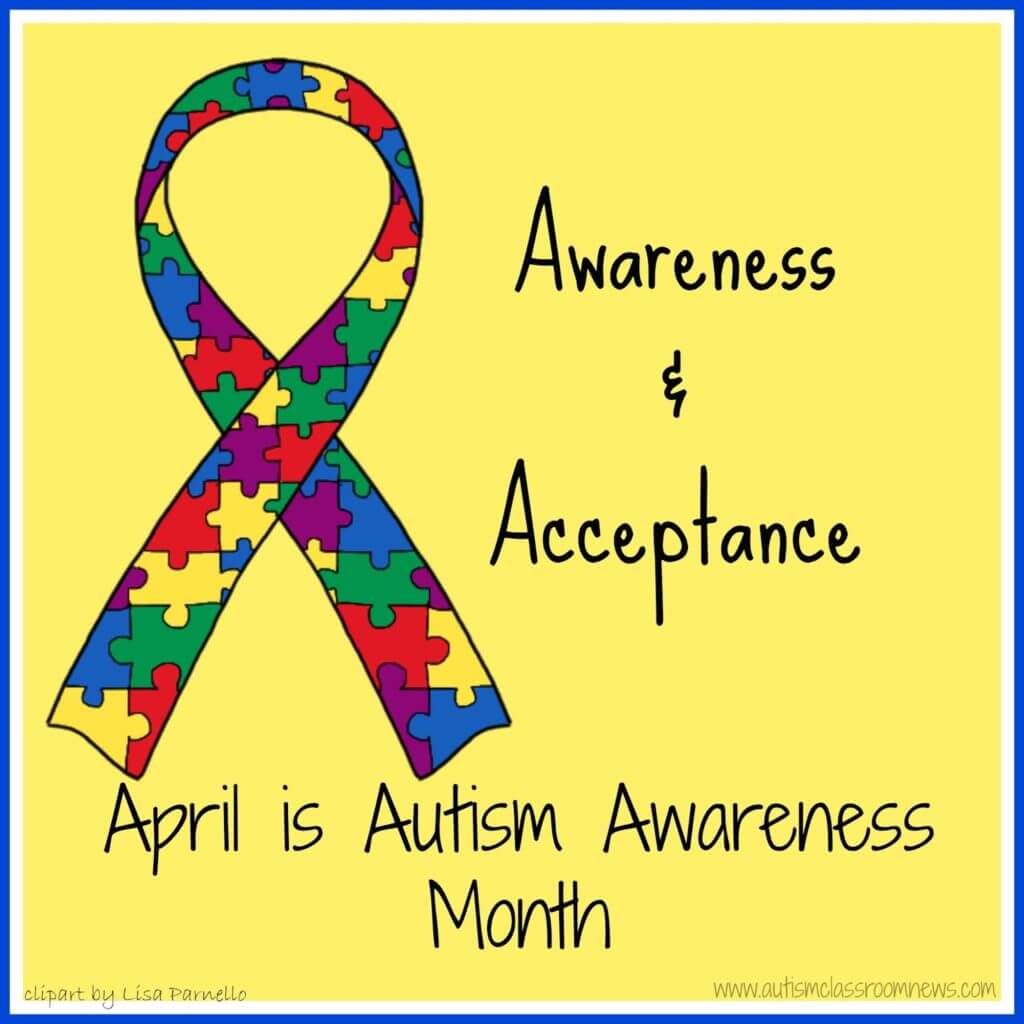 Many of you may be familiar with the puzzle piece and/or ribbon as the symbol for autism awareness efforts.  The puzzle ribbon was adopted as the official symbol of autism awareness in 1999.  Puzzle pieces have become pretty standard as an autism symbol–such as the ones in my blog design.  However, there are individuals, particularly self-advocates on the spectrum, who don’t recognize the puzzle piece and don’t feel it’s relevant to their life.  The saying, “Until every piece fits” makes them feel that people are saying they are missing a piece or they are not whole.  You have to admit that isn’t a flattering way for people to perceive you.  For my part, the puzzle is a different puzzle.  The person with autism is not a puzzle (anymore than all of us are puzzles).  However, autism and figuring how to connect with, understand and assist each other within the autism community is a puzzle–we have all the pieces–we just have to work together to put it together.    You can read more about the puzzle and some very interesting perspectives on it from a wide variety of individuals who responded to a request from the Autism Society HERE.

Along with the perspective about the puzzle ribbon, I have one last perspective to share.  Along with the Light It Up Blue initiative, most of you have heard the plea to wear blue on April 2.  For a variety of reasons, many self-advocates are asking that people wear red rather than blue as part of the #WalkInRed campaign and ask that we celebrate #AutismAcceptance month instead of awareness.  I encourage you to check out their page and read more about their views from them, as they can articulate it much better than I can.  Check it out HERE. 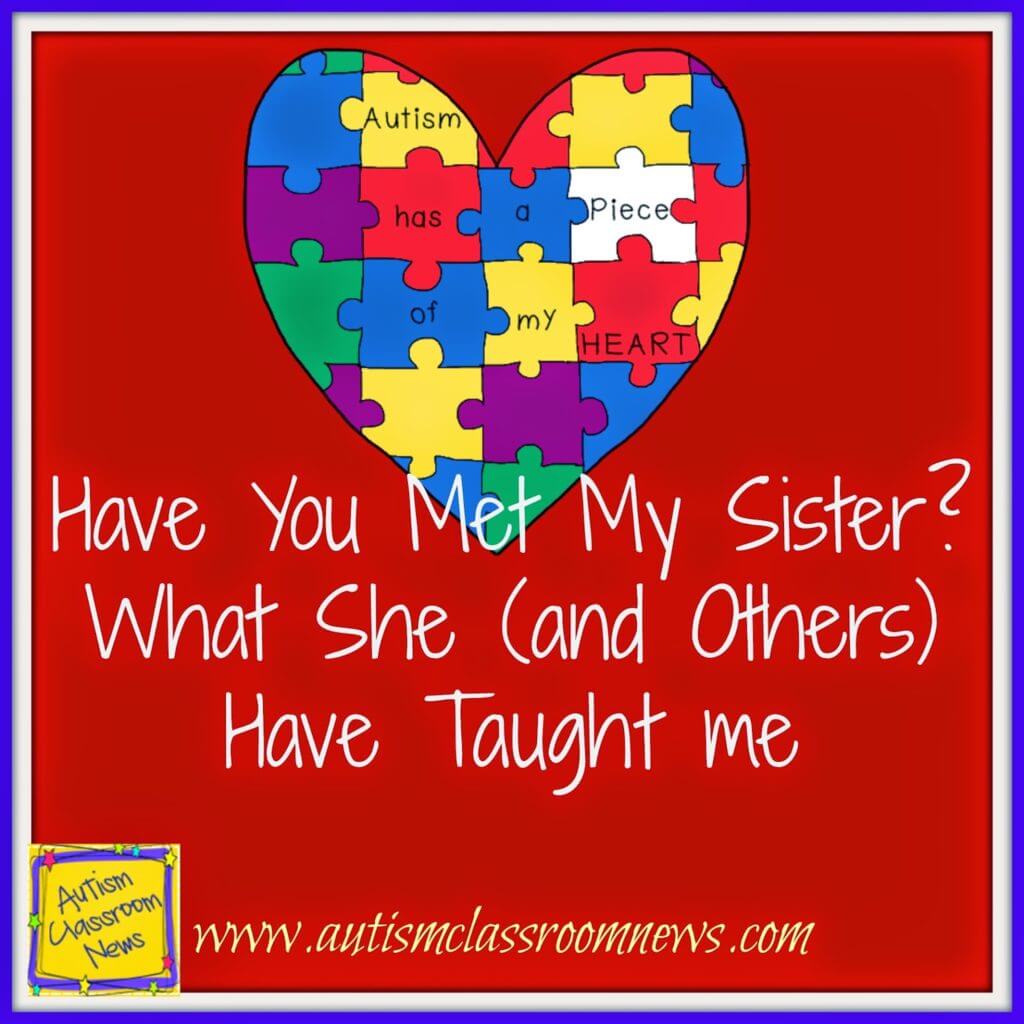 So, with all of that said, you may be asking where do I stand?  I stand for autism.  I believe that autism brings gifts and challenges, like so many things in life.  I think we are ready to move beyond awareness (which implies I know what it is but not that I accept it) to acceptance and to appreciate it.  My sister has autism.  I don’t love her any less (or more) because of the autism.  I accept her for who she is (at least I hope to most of time).  It’s part of who she is. Having had it both ways where we didn’t know what her challenges were from and then having an understanding of how autism impacts her, I much prefer to know and understand the autism.

Above all, though, I think that we have to work together from all different parts of the autism community and include others who are relevant for accessing services (like politicians) to help make the world better for those with autism, those who love them and those who meet them.

In that spirit of working together, a group of special educators have joined up to share a variety of resources with you.  Below you will find a link-up of freebies for families and professionals helping individuals on the spectrum.

So, whether you are new to autism or well established in the autism community, think about what you can do this month to not just raise awareness, but to truly accept and appreciate those on the spectrum.

8 thoughts on “Working Toward Autism Awareness, Acceptance and Appreciation: NAAM15”