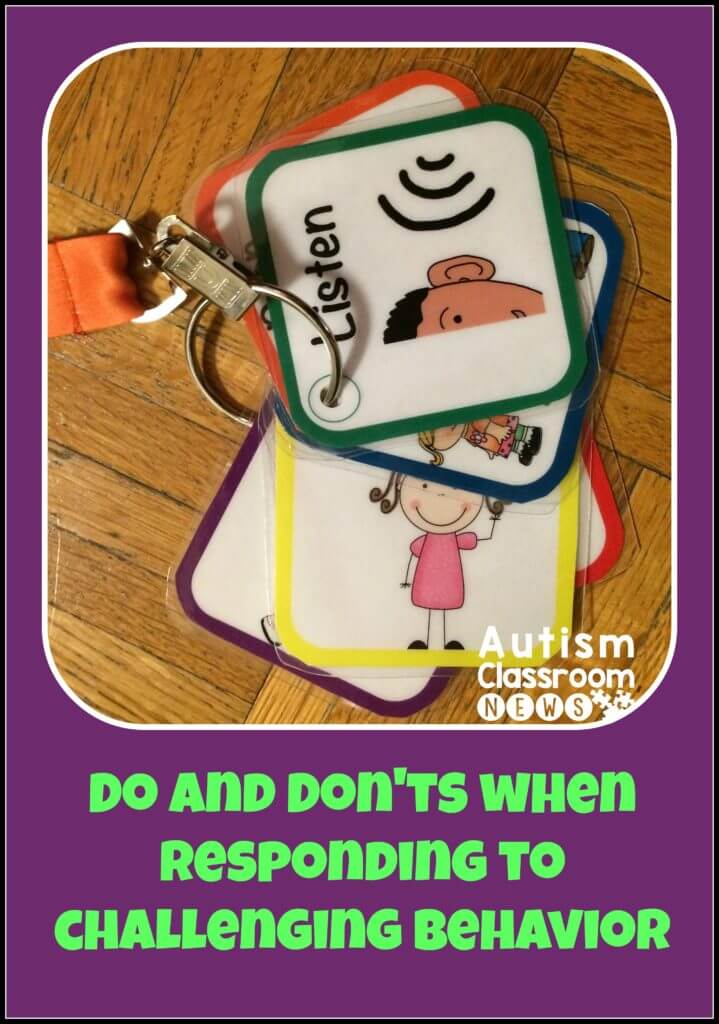 Oh those behaviors we can’t just pretend don’t happen!  That kiddo who hits the kid next to him because it lights him up like a Christmas Tree that cries screams–“He hit me!”  That girl who, in the middle of your instruction when you are working with another student, starts throwing your materials off the table including the scissors.

Our FBA shows that these behaviors are maintained by the attention they get from the peer or from you, but if you don’t intervene, what message does that send and will everyone be safe?  You know that attending to the behavior is only going to make it continue (although it stops it temporarily) but if you don’t do something the student is going to hurt himself or someone else.  There is a way to minimize attention to the behavior while still assuring everyone’s safety, but it does take some practice of some specific skills. Here are some dos and don’ts . 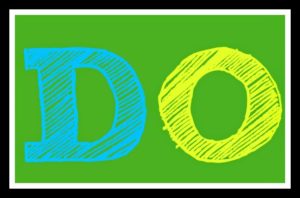 1.  Redirect With Gestures or Visuals

If you have to block a student’s aggression or keep him from being too close to another student, do it without talking.  Put your body, or a beanbag chair or some other soft object between the child and the target.  Keep your eye gaze directed away from the child; making eye contact engages the person. But keep the student in your view and watch covertly to assure safety.

3.  Attend to the Victim

Is the student attacking or teasing another student?  Put your attention on the student being targeted.  Ask him/her if he/she is OK, fuss over him/her, and pay lots of attention to that child and not the child who was doing the teasing or the aggression.  You can even talk about the expected behavior to the victim in some instances (e.g., “You are right.  We all need to have quiet hands.  But you’re OK.”).

Don’t sacrifice safety to avoid attention.  This may go without saying but it’s important to recognize that sometimes behavior is going to escalate and you are going to have to do something to keep a student from running out into the parking lot or hurting another student.  Those are times when you will have to intervene, but do it with as little attention as possible.

5.  Keep Your Emotions in Check

Try very hard not to let your face turn red and to keep your facial expression as neutral as possible.  Sometimes just the look on your face is enough to reinforce attention-seeking behavior.  Keep it calm as much as possible.  There will be times when you involuntarily yell out–like when a kid pulls your hair and you didn’t see it coming, but try to take a deep breath and calm yourself down. 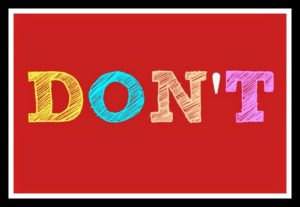 When someone is upset and engaging in behavior, even if it’s a meltdown that doesn’t seem as intentional, it’s not a good time to try to reason with them.  It’s not a good time to talk about the behavior.  In addition, language is likely to increase problems because even those of us who have average language skills have times when we are so upset we just don’t want to talk to anyone.  Have you ever said to your significant other or another family member, “Don’t even talk to me right now!”

3.  Don’t Touch the Student if You Can Avoid it

First, if he / she is upset, putting hands on will only escalate the situation.  That’s how fights break out.  If he or she isn’t upset but is engaging in the behavior more deliberately to get attention, physical contact is attention.  If you have to physically intervene to assure safety, you will have to, but make it as brief as possible.

4.  Don’t Talk About the Student’s Behavior

Even if you aren’t talking to the target student, don’t talk about his or her behavior in his/her presence.  You’ll be amazed what they can hear when they are screaming and you’ll be attending to the behavior when they know you are talking about them.  Instead, talk to other students about what they are doing right and the expected behaviors. That sends a positive message and removes the attention from the one having the problem.

5.  Don’t Forget to Teach Appropriate Ways to Gain Attention–and Attend to Them

When your FBA says the behavior is maintained by behavior, the replacement skill to use is something that gets that type of attention appropriately.  In addition to teaching the skill, it is important to make sure you are reinforcing that appropriate skill (e.g., tapping your arm, using a communication switch to call the teacher’s name) when the student engages in it.  If he/she gets more reliable attention for the negative behavior than the replacement skill, the negative behavior is going to continue.

So, I hope that gives you some thoughts about how to handle some of the challenging behaviors we see related to attention in particular.  Even though I’ve focused on attention-seeking behavior, the need to avoid reinforcing the behavior inadvertently even when it has other functions, means that all of these strategies are useful for any incident of challenging behavior.

5 thoughts on “DOs and DON'Ts for Responding to Challenging Behavior”