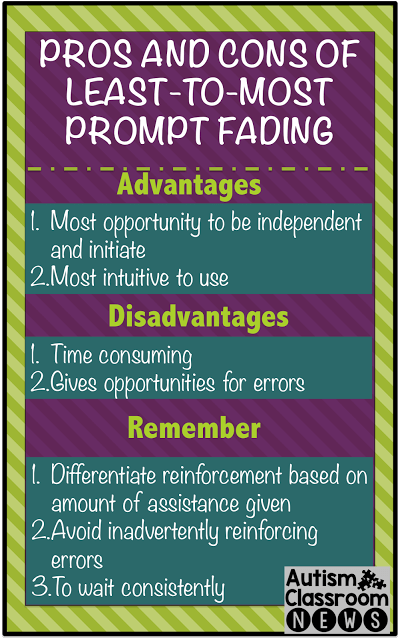 I talked in previous posts about stimulus prompts in which we change what we present to the student to help him get the correct answer and get the reinforcer.  It’s important to recognize that prompting and reinforcement are the elements of instruction that make it different than testing.  Just asking a student to do something and seeing if he does it is testing.  Even asking him to do something, seeing him do it correctly and reinforcing him is only going to go so far.  If we are teaching a skill from scratch (i.e., the student doesn’t ever exhibit it at the right time) then if we simply wait for him to display the behavior so we can reinforce it, we are going to be waiting a long time and learning is not going to be at all efficient.  Prompting is the way to speed things up.

Probably the most common type of prompt that we use is response prompts where we do something at the same time or after we give the direction or discriminative stimulus to spark the correct response from the student.  Often this involves a gesture, a physical prompt, or a verbal prompt–see the infographic about different types of prompts HERE.  To be effective with response prompts, we have to make sure we fade them out.  There are several strategies that can be used for fading.  It’s important to decide which strategy you are going to be using and make sure everyone working with the student on that skill are aware of that decision.  Visuals for adults (see the freebie below) can be helpful reminders.

What is Least-to-Most Prompt Fading?

This is probably the one most of us are familiar with.  This type of prompting requires us to use the least intrusive prompt first and wait.  If that doesn’t work, then we move up the intrusiveness scale.  So, for instance, if I’m teaching Sally to match 2 pictures of a shoe, I would lay out the set of pictures on the table including a picture of a shoe and hand her a picture of a shoe.  If after a set amount of time (e.g., a count of 3) she didn’t match it, I would point to the picture of the shoe. If she didn’t match them at that point, I would physically guide her hand to the picture of the shoe and see if she could complete the action (partial physical prompt). If she didn’t complete the action, I would provide a full physical prompt.  For each trial, I would use this system.

Least to most prompt fading can be used effectively and is used more frequently in teaching chains of behaviors like washing hands than for skills we often work on in DTT but it can be used for almost any skill.  Some things to remember when you use it are:
So those are some thoughts about one type of prompt fading. We often use least to most prompting when we teach independent work systems and using visual schedules.  If you are interested in a free visual cue for the adults to remind them of how to teach it, check out the freebie IN THIS POST.
And finally if you are interested in a downloadable, printable poster of the types of prompts infographic I shared in a previous post, you can DOWNLOAD IT HERE.

I’ll be back soon with another way to fade out prompts in instruction.  Until then, please share any tips or struggles you have with fading prompts in the comments so we can all benefit!

!
!
!
Subscribe
Terms and Conditions checkbox is required.
Something went wrong. Please check your entries and try again.
Scroll to Top
314shares
Let’s talk cookies. Unfortunately, these aren’t the fresh-from-the-oven kind. We’re using these cookies to find out how you use our site, so we can make it even more relevant to you. More in our Privacy PolicyAccept CookiesPrivacy policy