Troubleshooting When Classroom Staff Aren’t Performing As You Would Like 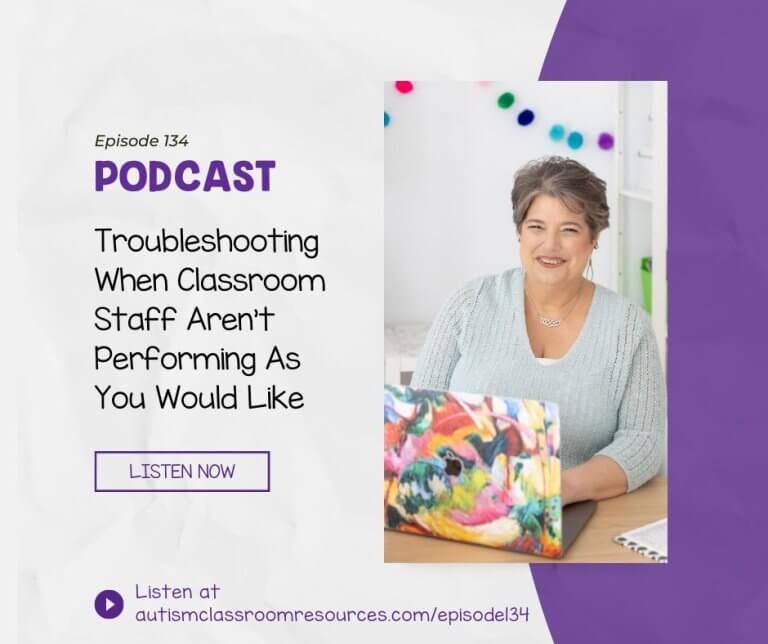 As a leader of the classroom, you’ve done everything you needed to do to set up your staff for success. You’ve created the zoning plan, trained them, and provided feedback to them (and received feedback in kind). But what do you do when things still aren’t going well with the staff?

That’s the really hard question I tackle in today’s episode, as we discuss what to do when classroom staff isn’t performing as you would like, so buckle in!

1:57​ – What to do if you have concerns about student safety due to a staff member’s behavior

4:13 – The mindset you must have in order to lead classroom staff effectively

6:15 – Where to start when someone on your staff isn’t performing as planned

7:25 – How to address a problem you see with anyone on the classroom staff

10:03 – What to do if the staff member’s issue keeps repeating itself

Come get a free trial in the Special Educator Academy where we have workshops and study groups on them.

Find out More and Start Your Free Trial

Welcome back to the Autism Classroom Resources Podcast. I am Chris Reeve, and hello. Whether you are settling into school already or just starting up, I know that today’s topic will be a big one. We have been talking about developing classroom teams. We started with the nuts and bolts of setting the foundation in Episode 131, with expectations and building relationships with staff. In 132, I talked about common roadblocks to providing training, and in our last episode, I talked about how to provide training to staff when you just have no one-to-one collaborative time.

Today, I’m going to tackle the really hard question. What do you do when you have done all the things you are supposed to do (the zoning plan, the training, the feedback, etc.) and things still aren’t going the way that you’d like in working with your staff? It might be one classroom staff member who isn’t working well with you. Maybe you’re concerned with them always being on your phone. Yes, I hear you when you tell me what’s going on in your classrooms. Or maybe they’re talking too much about the kids in front of them. Or maybe they’re doing too much physical prompting.

Typically these situations aren’t situations that are affecting safety. But if they are issues that are affecting student safety, let me start with “That’s a different story.” If you have concerns about a staff member whose behavior is putting a student’s safety at risk for any reason, that issue goes straight to your administrator. Yes, you express your concern to the staff member. But you also go to the administrator and you put it in writing, particularly if it’s happened more than once.

Situations that impact a student’s safety mean things like they aren’t being supervised properly and they’ve wandered away, they’re physically handling them inappropriately, or anything that affects a student’s safety or wellbeing. Don’t pass go, do not collect anything, go to the admin, these are not those issues.

Now, all of these issues, if they’ve gone on for months with you giving them feedback will eventually rise to the admin level as well. But as you are treating them, they are initially things that you need to be addressing in-room or in-house. As we talk about collaborating with the team in the classroom, I know this is something that most educators aren’t trained for in school, but it is something we talk about and have resources for in the Special Educator Academy.

So if you would really like to learn more about how to set yourself up for success this year in 15 minutes a day, come check out the Special Educator Academy. We have tools and tips that can help you help your students from workshops and trainings, to tips and templates to help you work and plan efficiently. Most of them can be accessed in 5 to 10 minutes a day. Grab your seven-day free trial at specialeducatoracademy.com. Now, let’s get started.

I don’t know about you, but I hate conflict with people. I mean, I would bend over backwards, walk on the other side of the street, walk on the other side of the city to avoid having to face up to a conflict with someone most of the time. That makes managing and leading people really, really hard. If left to my own devices without having students to be concerned about, I would never give anyone negative feedback and I would live in a world of Candy Slides and unicorns where everyone was happy and everyone heard happy things every day all day long.

Now I’m coming back to reality. Because we do have students to be concerned about and we don’t get to live in that world, we have to live in a world in which, number one, you realize you can’t educate these students on your own. Please stop thinking that you can. I know it’s tempting to think it’s easier to do everything yourself, but you are killing yourself and that’s not helping anyone in the long run. So stop it already and face up to the fact that you have to lead a team to make this work.

Sometimes we have to accept that okay is okay. Okay is good. Okay means I can focus on other things in the classroom and not this one issue. That’s a good thing. Sing a few choruses of Let it Go and let it go already. I say this as much to myself as I say it to anybody else.

But when it’s not okay, then we probably have to do something about it. We start with getting more direct feedback to the staff member which I talked a little bit about in last week’s episode. We still share what we see that is positive. Trust me, look hard, you can find it. There are positive things.

I once had a consultant tell me about a program I was running that he was so impressed that our staff loved our kids. I was so upset, because I knew that was his positive before he was going to give me his negative feedback. I saw it as something he made up. I couldn’t see it as anything else. I saw it as something positive he made up to say so he had something positive so he could give me his negative.

Twenty years later, I will tell you that was no made-up positive, that was a real d*mn thing. Excuse my language but it is really real, because I’ve spent my share of time in places where you could not have said that about anyone on the staff much less than an entire staff. Even the staff in the classroom. So yes, you can find positives, just look for them.

But you have to address the negative, the problems. Here’s how you want to do that. One, be direct, be clear, state the problem. You might say, “When I was observing you in the independent work area, I noticed that you weren’t watching the students when they were doing their work. So several of the students got up in the middle of their work and they never returned. It’s important that we make sure that the students stay and complete their series of work tasks. That’s what they’re learning in that area. I’ve seen that happen a couple of days now. Is there something going on that makes it hard for you to keep an eye on the students while they are working?”

I’m not asking her to justify her behavior, but I am asking if there’s something that is interfering in some way so I know what it is when we address it. Maybe her mother’s in the hospital and the hospital has called both days while the students were working. That would be a different conversation than she just wasn’t attending.

The independent work aid might say, “I didn’t realize that was the focus of what they were doing. I thought they were just supposed to work on their own and I wasn’t allowed to help.” At this point, I might bite my tongue and keep myself from asking aloud how she missed all the times I’ve explained it to her. Clearly, she did. Arguing and saying that to her isn’t going to help anyone. It’s not going to help her. It’s not going to help me. It’s just going to make that relationship sour. So again, instead, we teach.

Would it help to have a list of steps posted in the area? Would it help to have you focus on just one student at a time each day? Would that help make it easier so that you can work with that child from beginning to end? Throw out some ideas to get that discussion started.

You might go to an instructional coach, a special ed liaison, your assistant principal, or building supervisor and say, “I’m working with one of my paras and I feel like we’re going around and around on some issues. I’m trying to train them to X, Y, and Z. But it just doesn’t seem to be taking. I would really love your feedback and some other strategies I might try.”

This is especially helpful if this person is familiar with the staff member. By asking them for help in that way, then you’re not making it an admin problem, you’re asking them to help you grow as a professional, but you are making them aware of the problem. That helps you in both ways. Then they also can be on board with helping you if things continue or worsen over time to help you make decisions about when this does arise to an administrative supervision level.

Those are some strategies that you can follow through with troubleshooting how it would be like. Clearly this is something that we can make a whole course out of. It’s something we talk a lot about in our office hours in the Special Educator Academy. If you’re looking for more guidance for how to grow your leadership and teaching skills as a special educator, come grab your seven-day free trial. You can grow your confidence, your skills, you can build them in a community of like-minded educators in 10-15 minutes a day, just a few days a week. Find more at specialeducatoracademy.com.

I’ll be back next week with some episodes on data collection and data analysis. I hope that you’ll join us then. Until then, make sure you’re following us on our Facebook page at facebook.com/SpecialEducatorAcademy for all sorts of tips and announcements. Until then, I hope you have an amazing week.