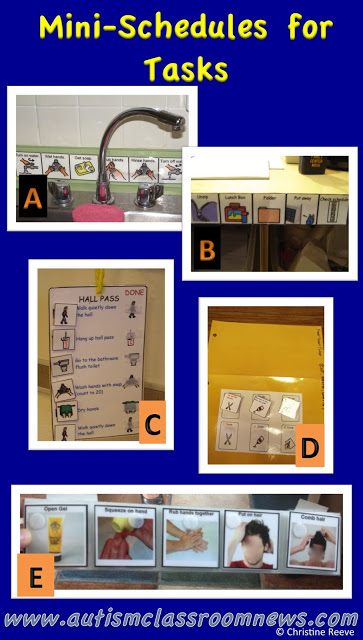 In this series about schedules, I have talked about the importance of schedules, individual schedules and group schedules.  Today I want to talk about the need for mini-schedules.  Sometimes these are called picture task analyses, sometimes they are referred to as a schedule within a schedule, sometimes they constitute a to-do list.  To make it easier to discuss, I’ve broken them down into 2 categories: schedules of activities within an activity and task analyses for completing routine tasks.  Both are task analyses, but the first is essentially breaking down the activities that will take place in a larger activity while the second are typically the steps to complete a task like arrival, brushing teeth, or a play scheme.  In other words, it would be the difference between a mini-schedule telling a student to play with Legos, play kitchen, and blocks in the play area, versus a schedule that gives the steps for a play scheme of washing the dishes in the play kitchen.

So today, let’s talk about mini-schedules for tasks or picture task analyses.  Like all schedules, these types of schedules are designed to help an individual complete a task independently.  They are not very different than the directions to assemble your coffee maker, which now actually come with pictures like the one below.  Proving once again that we all use schedules of some type.  Some common picture task analyses that you frequently see in classrooms are the steps for hand washing (A) and for completing the arrival routine (B).

5 Things to Think About with Mini-Schedules for Tasks

So, when you see a student not engaging in an everyday task, you might want to think about how a mini-schedule / picture task analysis could help.  In the next post I’ll be back with some more examples of mini schedules for routines.  In the meantime, how have you used picture task analyses in your classroom?