The 3 Most Important Considerations in Choosing Replacement Behaviors 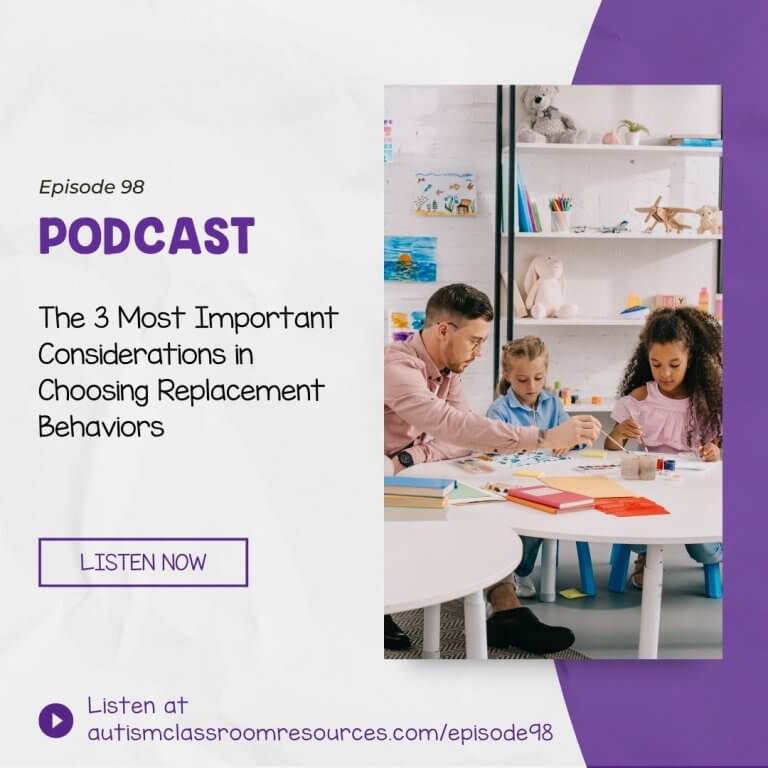 It’s that time of year when challenging student behavior starts cropping up and behavior plans get put to the test. When coming up with replacement behaviors, you can’t just rush your way through it and hope for the best, though. You need to carefully consider certain characteristics in the ones you choose. These three traits will make the difference in whether your plans work or not. So in this episode, I discuss more about replacement behaviors and making sure they’re effective in actually changing the way students conduct themselves in your class.

2:30​ – A quick explanation for understanding the truth of replacement behaviors

5:43 – An scenario where replacement behavior proves inefficient and fails

9:36 – The real beauty of this kind of functional communication training

Join us inside the Special Educators Academy for your 7 day free trial.

Episode 96: “The 3 Biggest Behavioral Support Mistakes Committed In the Classroom”
“Steps to Meaningful Behavioral Support Round-up”
“What Are Replacement Behaviors and What Do We Need to Know to Be More Effective With Them?”
“Functional Communication Training: Why It’s More Than Just ‘Use Your Words’”
Prefer to read? Open the transcript here.

Welcome back to the Autism Classroom Resources Podcast. I am Christine Reeve, your host. It’s the time of year when we tend to talk about challenging behavior because it’s the time of year when we start to see challenging behavior. Especially I think this year, I’m recording this in fall of 2021 and it’s a lot, there’s a lot. I want to run through some of the things that I think makes sense to think about when we think about challenging behavior. In this episode, I’m going to be talking more about replacement behaviors. Frankly, we give replacement behaviors a lot of lip service but we really don’t talk nearly enough about what we need to really know about them. We tend to think that it’s the same as “Just use your words”, and if it were that easy, everybody would be cured by now and we’d have no problem behavior because that would be simple.

That is critical. But today I want to dive deeper and I want to go beyond that. It’s really important that it serves the same function but it also needs to have three additional characteristics so that it can compete effectively for the reinforcement with the challenging behavior and when. Because that’s what you’re really trying to do. You are trying to create, not just a replacement behavior, but in order to replace the challenging behavior, it has to win the contest. In addition to serving the same function, your replacement behavior needs to get reinforcement, meet that function more efficiently than the challenging behavior does. That’s the secret sauce that makes it work. I can sign off right now. You know what that means, right? No. Oh, okay. Then I’ll keep going.

Efficiency in behavior essentially means three things. It means that the replacement behavior gets the reinforcement so it gets attention, gets escape faster, easier, and more consistently than the challenging behavior. Whichever behavior meets that criteria is likely to increase, and the one that doesn’t will decrease. That’s essentially what we’re trying to do with functional communication training and functional skills replacement. We’re trying to teach the student to communicate for what they need to replace screaming or hitting or whatever the challenging behavior is that currently gets that reaction, that attention, that escape, or whatever that challenging behavior is.

What all this means is that in order for this to work, we have to choose the behavior like the communication strategy that will get the attention, the reaction, for instance, faster, easier, and more consistently than the negative behavior, i.e screaming, crying, etc. Let’s break down what that means with an example. Imagine Deandre who climbs on the furniture in the classroom. An FBA showed that his climbing gets a big reaction from staff because they have to work to get him down because they’re worried about his safety. He has limited initiation and limited communication and he does not currently ask for attention in any way from adults or peers. The team decides to teach him a pretty common way to gain attention in a classroom of raising his hand to ask for attention. However, they put this in place and after we worked on it for a while, Deandre raised his hand, and when someone was sitting beside him, got attention and he didn’t climb on the furniture. But when someone wasn’t close by, he went and immediately started climbing on the furniture. The staff still of course needed to get him down and tended to get frustrated because they were worried about him.

Now, it wasn’t really clear to them why this was happening. But in looking at the situation as I’ve just described it to you and as an outsider, it becomes a little clearer why Deandre was still climbing because he was climbing when he was left alone. If he raised his hand, no one was right there with him and nobody saw him so nobody attended to him quickly. But when he got on the furniture, people attended to him quickly. Sometimes, when he raised his hand, people responded. But every time he climbed, people attended. It was probably a little easier to raise his hand than it was to climb, but it wasn’t quicker or more consistent at getting reinforced so it was less efficient. Since it was less efficient, it failed to replace the climbing behavior. With the climbing, we couldn’t really completely ignore it so we were limited in decreasing its efficiency.

That meant we had to be very careful choosing the communication strategy to increase its efficiency. Instead of a silent communication form that could easily be missed and overlooked, we started looking for a strategy that got a big reaction. Since Deandre wasn’t very verbal and since we couldn’t make him talk even though he did have a little bit of speech, we gave him a speech generating device. But it wasn’t just any speech generating device, we gave him one that was loud and that got a big reaction from the staff. It got their attention quickly and easily. And yes, it was a little disruptive to the class but you know what, so was climbing on the furniture. It had to compete at that level.

Over time, we can change that device and make it less disruptive. We can fade that once he starts using it more regularly. But we got to start where the behavior is at. We’ve got to start with something that’s more attention seeking to be more efficient than climbing. In the meantime, we also worked at redirecting the climbing behavior with as little attention as possible. That meant working with staff on using non-verbal prompts and less talking when they redirected him so that we can at least try to play down some of the attention and reaction while still making sure that he was safe, so giving him less attention but assuring safety.

Always be thinking about how we can boost that efficiency and of that replacement behavior and decrease the efficiency about the problem behavior. That is really the blessing of functional communication training in general is that we don’t have to necessarily just blanket extinguish the negative behavior by withdrawing all the attention to it or withdrawing all the opportunities to escape, we just have to boost the efficiency of the replacement behavior to make it more efficient at getting those reinforcers and decrease the efficiency of the negative behavior that we’re trying to get rid of. That allows us to manage it much more effectively in a classroom environment where we can’t completely ignore some of those behaviors or not attend to them or respond to them. It gives us more options and I’m all for behavior management that gives us more options.

If you are struggling with trying to figure out how to make all of this work in your classroom, trying to figure out how to get a student’s behavior under control, trying to figure out what to teach as a replacement behavior, come and join us in The Special Educator Academy. We have a whole course on behavioral problem solving that walks you through doing the functional assessment, all the way through choosing the behavioral support plan. We have a Facebook community as well as an on-site community that has some great experience in working with students just like yours, and you do not need to feel like you are alone in your classroom to try to figure this out on your own. You can get a seven-day free trial at specialeducatoracademy.com and we would love to have you join us.

In the meantime, I will make sure there are some links in the show notes for this episode about the efficiency of behavior as well as some other posts about this topic. You can find that at autismclassroomresources.com/episode98 so you can do that and grab a transcript of this episode as well. As always, thank you so much for spending this time with me. I hope that you’ll come back next week when I’ll be talking some more about challenging behavior. Until then, I’ll just be over here thinking about how to make eating chocolate a less efficient response than eating a salad.