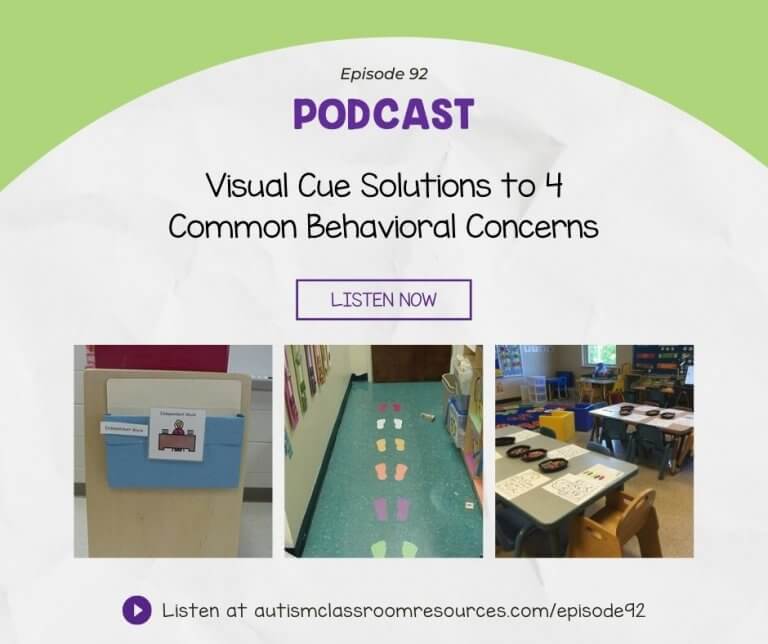 You see visual cues everywhere you look–restroom signs with gender indications, traffic lights and stop signs at intersections and on corners, etc. They’re pretty easy to implement and even though they don’t automatically solve problems, they work more often than not. So they should work in the classroom too, right? In today’s episode, I discuss student behavioral issues that you can address and solutions to common behavioral concerns.

1:34 – Visual cues to check before you start assigning supervision

2:24 – Next thing to keep in mind for after you implement visual cues

3:54 – Other solutions to common behavioral concerns.

Join us inside the Special Educators Academy for your 7 day free trial.

Episode 84: “How to Prep Your Classroom and Reduce Overwhelm with Visual Cues”
”What Classroom Visuals Do I Need to Start School?”
“Visual Cues: They Are Not Just for Autism”
“Visual Schedule Series: The Importance of Check-In Stations”
“6 Ways to Create Check-In Stations Cheaply and Effectively”
Prefer to read? Open the transcript here.

Welcome back to the Autism Classroom Resources Podcast. I’m Christine Reeve, and I’m your host. I am so glad you’re tuning in today when I’m talking about troubleshooting issues in classroom design. In episode 89, I talked about the process of troubleshooting, what’s working and what’s not working in your classroom. In today’s episode, I’m going to talk about problems, particularly behavioral issues that can be addressed by adding or changing visual supports in the classroom, so let’s get started.

Today’s first behavioral issue is students who are wandering the room and not being where they are supposed to be. Now, this might be a student who checks his schedule but doesn’t end up where he needs to be, or it might be a student who just wanders for the whole transition. Some of this might be related to zoning issues of needing someone to assure that they’re checking their schedule, but it’s also possible that they didn’t know where they were supposed to go. Before you start assigning people to supervise them, look around your room and make sure that it’s visually clear where they are supposed to be. Do you have a check-in or a docking station that has matching visuals to their schedule so they know that is where the schedule tells them to go? Do they know how to match pictures? If not, that is something that we need to teach. Are the visual cues in the area such that when they get to the area, they know what to do? Are the chairs set out at the table? Are materials on the table to engage with? If nothing is there to do, the visual cues aren’t telling them to stick around. We have to remember that visual cues are more than pictures, they are everything that the student sees.

Now if you have a routine where the student gets his chair and brings it, do you have some way to communicate that to him and does he know that that’s the routine? If he doesn’t know that, we have to teach it to him. If he does, then we may have a different problem. You have to think through all those kinds of issues. But if our cues aren’t clear, then we’re not getting what we want across to him.

The next issue is students lining up at the door and touching and fighting each other at line. This is the most magical of all interventions that I’ve ever seen. You put markers or pictures on the floor to show them where to stand. I always forget to do this when I first set up the room. It’s always the last thing that I get around to and so it always falls by the wayside. On that first day, the kids are always a mess standing in line or they’re really not standing in line. I do it after that first day and suddenly they stand on the markers with no issue. I put paper on the floor, and the behavior problem is gone. Similarly, if you need students to space themselves out when sitting on the carpet because they’re touching each other and in each other’s space, markers on the floor can help. Also, if you want to prevent two students from sitting next to each other because they get on each other’s nerves, use names on their tables or their chairs and keep them apart by assigning their seats.

Another problem I often see is students who are moving their chairs around to get too close to the teacher in a group activity, or a student who’s moving his chair away from the table during work time, or moving it too close to up here and bothering or distracting that student. Now as I noted last week, visual cues and room arrangement as preventive or antecedent strategies are one step in stopping the problem. We still need to do an FBA and look for replacement behaviors. But we also have to prioritize which behaviors to address first and this is a first step.

For this issue, consider putting tape on the floor around the student’s chair. It could be a square or just a partial square of masking tape and that helps him know where his chair needs to stay. Amazingly, a lot of the time, it works. Later, you can fade it by simply pulling up the tape a little piece at a time. Finally, what about students who are always touching the materials of the students sitting next to them? That’s a similar issue. You could use masking tape or duct tape to make a boundary of his space on the table or use a placemat with his name on it and just have him keep his material on that placemat or a cookie sheet with boundaries in that same way. The great thing about visual cues is that they are pretty easy to implement. They don’t automatically solve problems and we do teach students what they mean but they do work more times than not.

If you’re looking for more support on troubleshooting problems like these, definitely come and check us out at specialeducatoracademy.com where we have tons of community, resources, and training support just for teachers like you. You can grab a transcript and links for this post at autismclassroomresources.com/episode92. Thanks so much for listening. I hope that you’ll come back next week for another snack sized episode about visual cues that can address common behavioral concerns. Until then, I’ll just be sitting here thinking about a student I had who would cover his eyes whenever we showed him a visual cue. It was kind of his version of putting his fingers in his ears because he followed every visual cue that he saw.