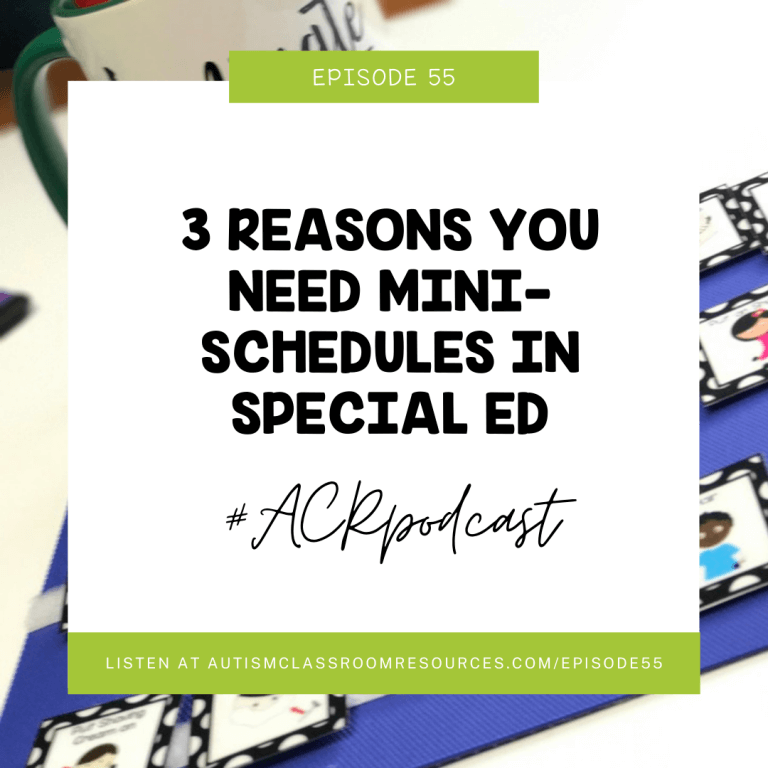 Mini schedules are a type of visual schedule that often get forgotten in the classroom. We have so many visual supports that we sometimes think just the daily schedule is enough. We sometimes talk about mini-schedules as task analysis schedules or teaching schedules.

If you have followed the blog or podcast for any length of time, you know I’m a huge fan of visual supports of all kinds. I also think that when things are changing rapidly, as they are in Fall 2020 when this was recorded, that increasing visuals can reduce stress.

What Are Mini Schedules?

Mini-schedules break down activities within the daily schedule. They can break the activities down in 2 primary ways. It could be breaking down the individual steps. So, a mini-schedule to wash hands that we use in many of our classrooms serves as visual support for the task analysis of the skill.

A mini-schedule could also be used to depict shorter activities within a larger scheduled activity. For example, a morning meeting schedule that shows we are going to sign in, sing a song, and read a story

Read the rest of the post or listen in the box at the top of the page. Grab the free download at the bottom of the page.

Those are just some ways that mini-schedules can help make students both faster learners and more independent at a variety of functional skills.  If you are looking for mini-schedules you can print and use, check out my mini-schedule bundle on TpT.

There are 2 mini-schedules included in this set, each with 5 different backgrounds.  Originally this free activity was for visiting the pumpkin patch.  However, in the fall of 2020, many aren’t making that field trip.  So I added carving a pumpkin.

Why Use Visual Schedules?

First, let me say that I don’t think visuals are just for students with autism. In fact, if I had more time, I have a whole beginning of a presentation about how we all use visual schedules. I write notes to myself, priorities my daily list of things to do, and make checklists of steps to tasks I don’t complete frequently. Those are all examples of visual supports.

Why Mini Schedules are Important in Your Classroom

I think that most teachers, especially those working with students with autism, are told they need visual schedules. However, they aren’t always told WHY the visual supports are so important. The full explanations are longer than I can cover in a podcast. However, these are 3 primary reasons that mini schedules, in particular, improve your instruction.

Many of our students become easily dependent on verbal prompts, or prompts in general.  For students with autism, this is because they may not attend to the relevant information in their environment.  So they may attend more to the prompt than the cues of the task.  For other students, it might be a similar reason. Or maybe they hear our verbal directions so frequently they come to rely on them.

So, our teaching is typically most successful if we use more nonverbal prompts. If your student can understand pictures, then nonverbally point to the picture of each step.  This can then easily be faded by fading the point (i.e., moving your finger farther away, waiting before pointing to see if there is independence).

By using nonverbal prompts, your students learn to follow that first direction (i.e., “load the dishwasher”). Then the steps of the task become the cues they follow for the next step.

Let’s face it, visual schedules aren’t just for our students.  Mini schedules cue the staff on the steps of a task.  They remind all of us about what comes next.

But am I less independent going to the grocery store with my grocery list? I think not. We are all taught to do that to improve making good food choices (not my strength)?  I’m being a good shopping planner.  So why would we think that a student isn’t if he has a grocery schedule or a picture list.

Do you have a checklist for packing for a trip? Do you have directions you look at to start your grill (if you’re paranoid about blowing it up like I am)?

Long and short…if the student can go to the grocery store with a visual schedule but without an adult telling him each step, he is more independent, not less.  If he can wash his hands in the bathroom with a visual schedule he takes out of his pocket but without an adult having to accompany him….he’s more independent, not less.

Download Transcript
PrevPrevious EpisodeHow to Give Choices and Improve the Most Challenging Behaviors (Ep. 54)
Next Episode5 Reasons You Need to Talk Less to Promote Language in Special Ed (Ep 55)Next