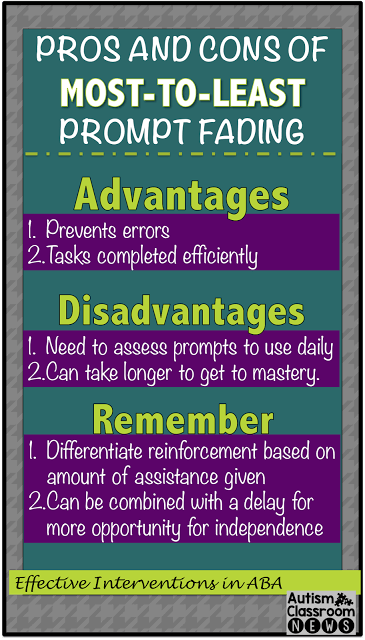 Continuing the series on the series on Effective ABA Instructional Interventions, the next prompt fading strategy to address is Most-to-Least prompt fading.  Like least-to-most fading that I talked about in the last post in the series, this fading procedure involves using the hierarchy of prompt types to fade them out.  However, as it is named, you start with the most intrusive prompt and gradually reduce the intrusiveness of the prompts until the student is independent.

What is Most-to-Least (MTL) Prompt Fading?
In this fading strategy, you use the most intrusive type of prompt and as the student is successful with that prompt, you drop to the next most intrusive.  So, let’s say I am teaching Sally to identify pictures of vocabulary words.  When I  first introduce the task, I give her the direction (i.e., find block) and immediately physically prompt her to touch the picture of the block. I use the physical prompt for a set period of time (through the first or first and second teaching session) and then I would use a partial physical prompt as soon as I give the direction.  Gradually I would work my way down the hierarchy until the student was independent.

Alternatively, I could also assess the prompting levels each day to determine how intrusive my prompt needs to be.  In that case, I would conduct a probe at the beginning of each teaching session.  A probe would be a set of trials where I present all the targets one at a time and use least to most prompting to see what the least intrusive prompt the student needed to give correct responses.  Typically this is done without reinforcement and it’s brief with no more than 1 presentation of each target.  It’s not a teaching part of the session; it’s an assessment.  I then record the type of prompt that was needed and use the most intrusive prompt that was needed in that probe for the teaching/instructional session.  This allows me to possibly move more quickly up to more independence based on the rate of the student’s learning.

Disadvantages
Things to Remember
So, to sum up, MTL with a delay is often a good default choice that gives the student an opportunity to be as independent as possible while making fewer errors.  However, some learners still perform better with LTM or other fading possibilities.  These two prompting strategies also work well with motor skills, but are more difficult to use with verbal skills because the prompts are harder to fade.  I’ll talk more about that in the next post in the series.
Research has indicated that there are individual differences in responding to prompting, so you have to use your data to determine what is most effective (Libby et al., 2008) and the Libby et al. article (found HERE) is a good review (at the end of the study) of guidelines to use to decide if you are looking for more information.
As an added announcement, be on the lookout in the next few days for some surprises.  I have lots of exciting ideas for growth of the blog and other things over the summer.  In particular I have a new discrete trial product that should be posted in the store in the next couple of days along with some new generalization materials.  So stay tuned,
Until next time,

!
!
!
Subscribe
Terms and Conditions checkbox is required.
Something went wrong. Please check your entries and try again.
Scroll to Top
200shares
Let’s talk cookies. Unfortunately, these aren’t the fresh-from-the-oven kind. We’re using these cookies to find out how you use our site, so we can make it even more relevant to you. More in our Privacy PolicyAccept CookiesPrivacy policy