Thomas and the Thinking Chair: Why "Consequences" Aren't Always What You Need 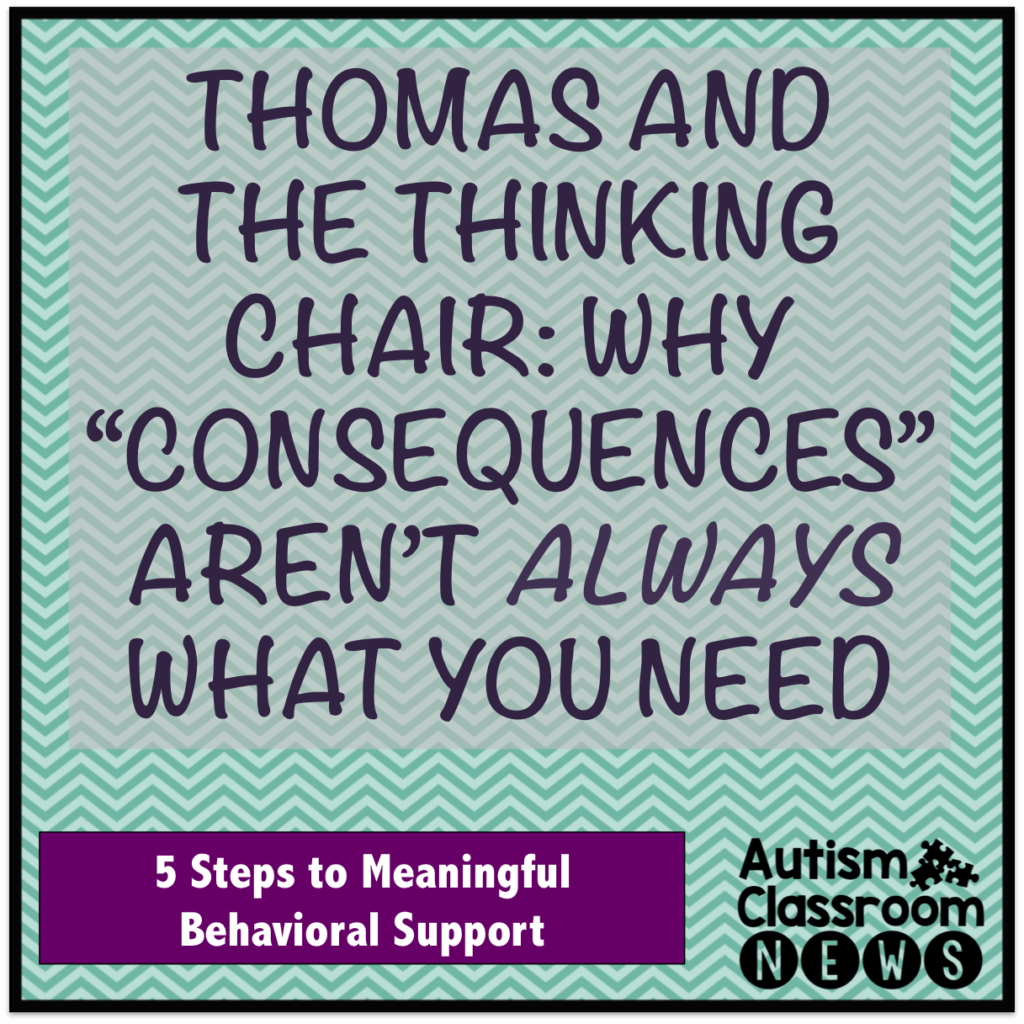 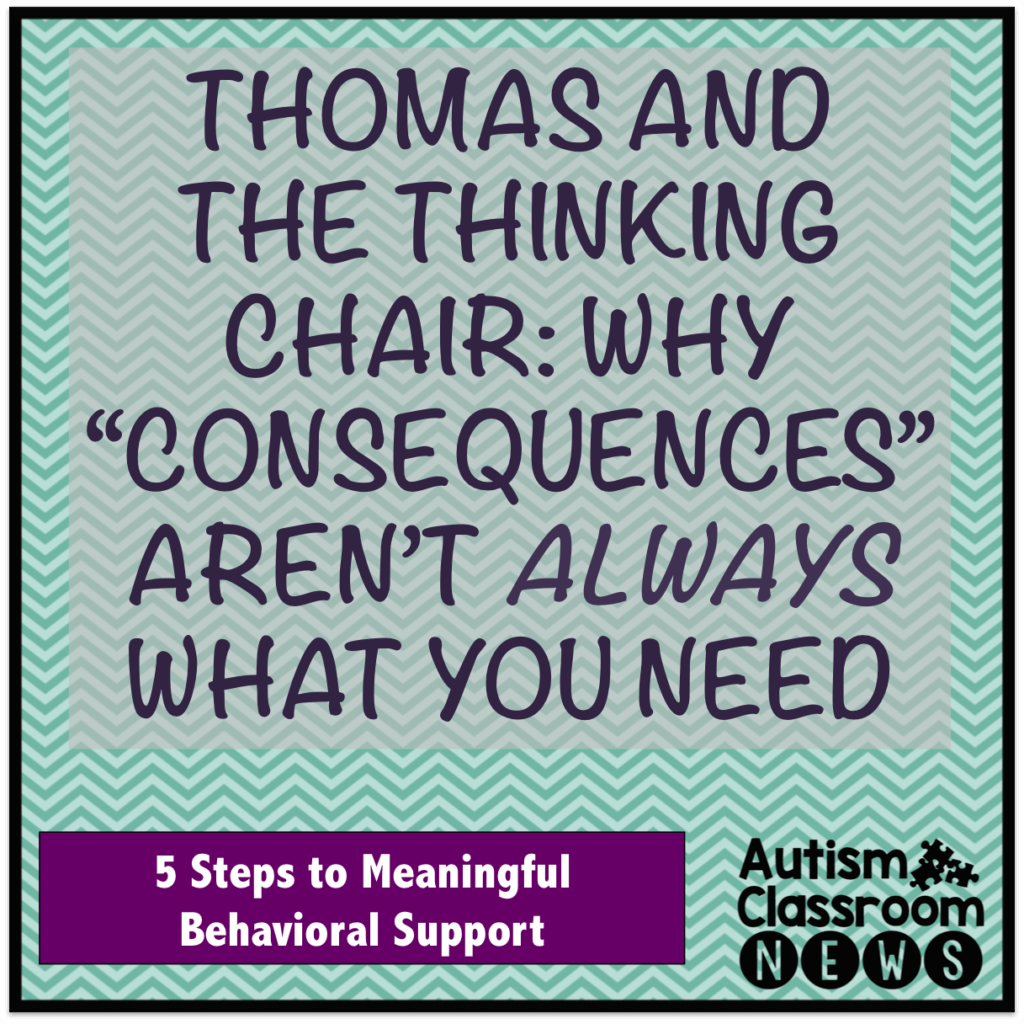 The final step for strategies in writing a successful behavior plan is developing the responsive strategies.  I spoke in my last post about DOs and DON’Ts for Responding to Challenging Behavior.  That post generated more views and interest than most of the other posts I’ve written.  So, either, everyone is really struggling with how do we respond when there is challenging behavior or we are missing the fact that most of our work has to come when challenging behavior isn’t happening.  I suspect it’s probably a combination of the two because we do struggle with how to react to challenging behavior and we do live in a society in which most challenging behavior is addressed and discussed in terms of how to respond to it, rather than how to prevent it.  I hope that the series leading up to that post helps us to remember that it’s the work we put in up front with the teaching replacement behaviors and using antecedent interventions that creates real behavior change.

With that said, let me talk a little about what we, as a society, term as “consequences” for behavior.  One of the things I hear over and over again in my job is, “He needs to have a consequence” and “I can’t just let the behavior go. He has to be disciplined.”  Believe it or not, a punishing consequence for one student is not a punishing consequence for another.  Just like reinforcement, it depends on how the consequence affects future behavior. If the behavior decreases, it was punishment.  For some, our “punishment” is actually a reinforcer.

Let’s take a common consequence we often use with young children and sometimes in school: Removing a student from an activity as a consequence of his or her behavior.  Essentially it is separating him or her from the group.  Sometimes people call it the thinking chair, as in the place to think about your behavior.  This consequence is frequently used with typical young kids.  It’s effective, in moderation, with most problems presented by typical kids because typical kids are often hungry for adult attention and like the activity they have been removed from.

Now, let’s consider Thomas (who is not a real person but whom many of you may feel you know).  Thomas is a 5-year-old with autism.  Interacting with other people is one of the hardest things he does all day.  It’s not that he doesn’t like people or to be completely isolated, but social interaction and communication are hard for him.  Most of his interactions focus around things he wants to get or sabotaged situations adults create to get more communication and interaction from him.  And sometimes Thomas starts hitting the kid sitting next to him or shoves him off his chair, and starts to scream, in the middle of morning meeting.

A functional assessment reveals that Thomas’ behavior serves for him to escape from the social activities.  Before the functional assessment was completed, Thomas’ teacher was doing something many preschool teachers do and removing him from the morning meeting to the thinking chair until he calmed down.  The data showed that calming down usually didn’t occur until it was time to move to centers.  When the behavior analyst shared this with the teacher and told her that she needed ignore the screaming and hitting and keep Thomas in the circle, obviously she was upset and not happy with that solution as his behavior was ruining her teaching activity for the whole class.  She also stated that she “can’t just do nothing!  He has to have a consequence for that behavior!”

So, was think chair or time out effective for decreasing Thomas’ behavior?  Was it an effective consequence?

NO!  It was actually reinforcing the challenging behavior.  Thomas’s hitting was followed by escape from the activity that probably was pretty difficult for him (sitting in a group, communication, social interaction).  Just because the teacher was the one removing him didn’t make it any less reinforcing.  Just because we perceive removal as being a punishment didn’t make it one for Thomas.

With that said, there also needs to be a good bit more thought put into how to address Thomas’ behavior than simply making him remain in morning meeting (i.e., simply changing the consequence).  That’s going to be a difficult task for the teacher to accomplish and be very disruptive for the rest of the class, so that is not a good solution. 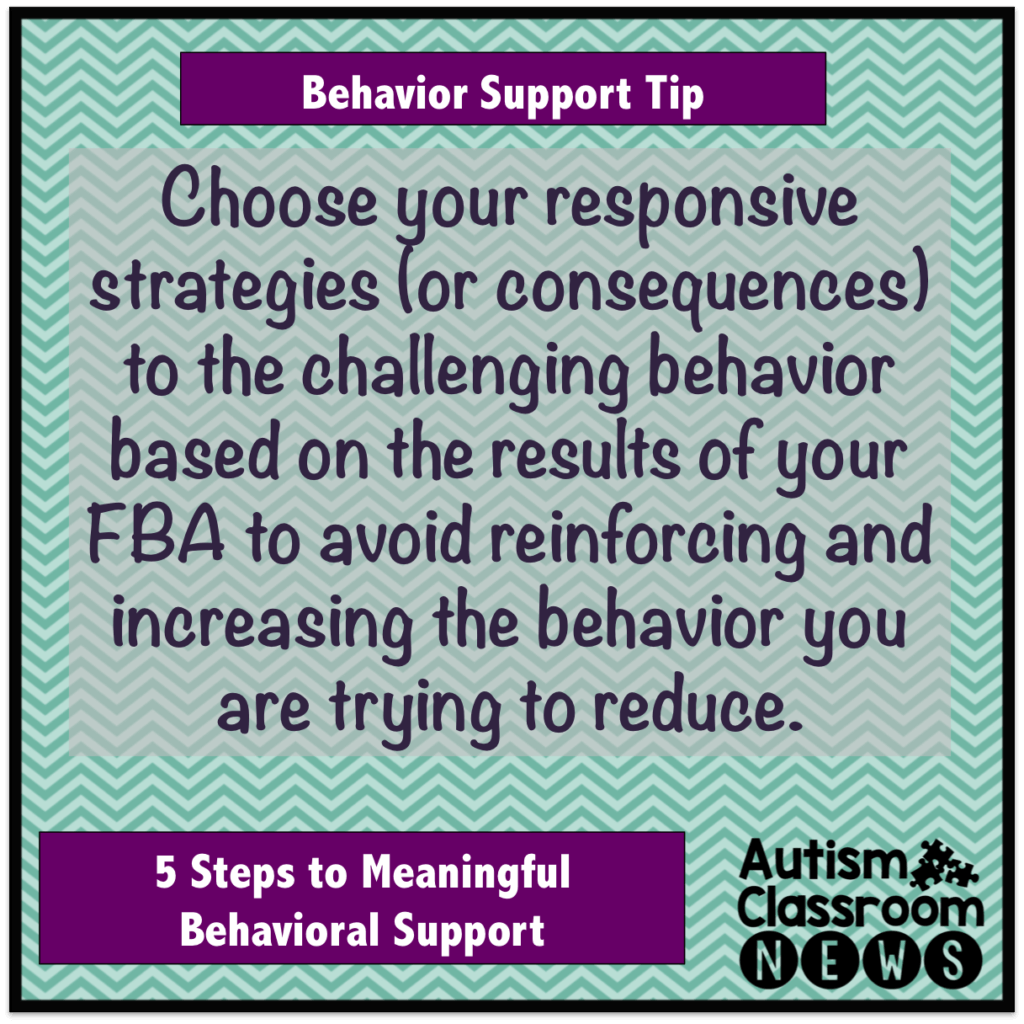 Other solutions might include teaching Thomas to ask for a break, giving the teacher the opportunity to remove him for an appropriate skill rather than an inappropriate behavior.  Another might be changing morning meeting so that he has more communication and social support through more communication supports and more visuals (like a mini-schedule that shows him what is coming next).  And still another idea is to have him only participate in shorter periods of morning meeting and then move on to another activity proactively (taking into account how long he can usually sit without a problem) and reinforcing him for participating appropriately during that shorter time period.

So, in keeping with my mantra that there is ALWAYS more than one solution to every problem, you have to find the solution for challenging behavior that fits the student and the environment.

Just like with anything else, when choosing a response (or consequence) to challenging behavior, look to your FBA to tell you what will or won’t be effective.  And try to help others understand that “consequences” aren’t always the most effective way to change behavior.

Stepping down from my soapbox (until next time),