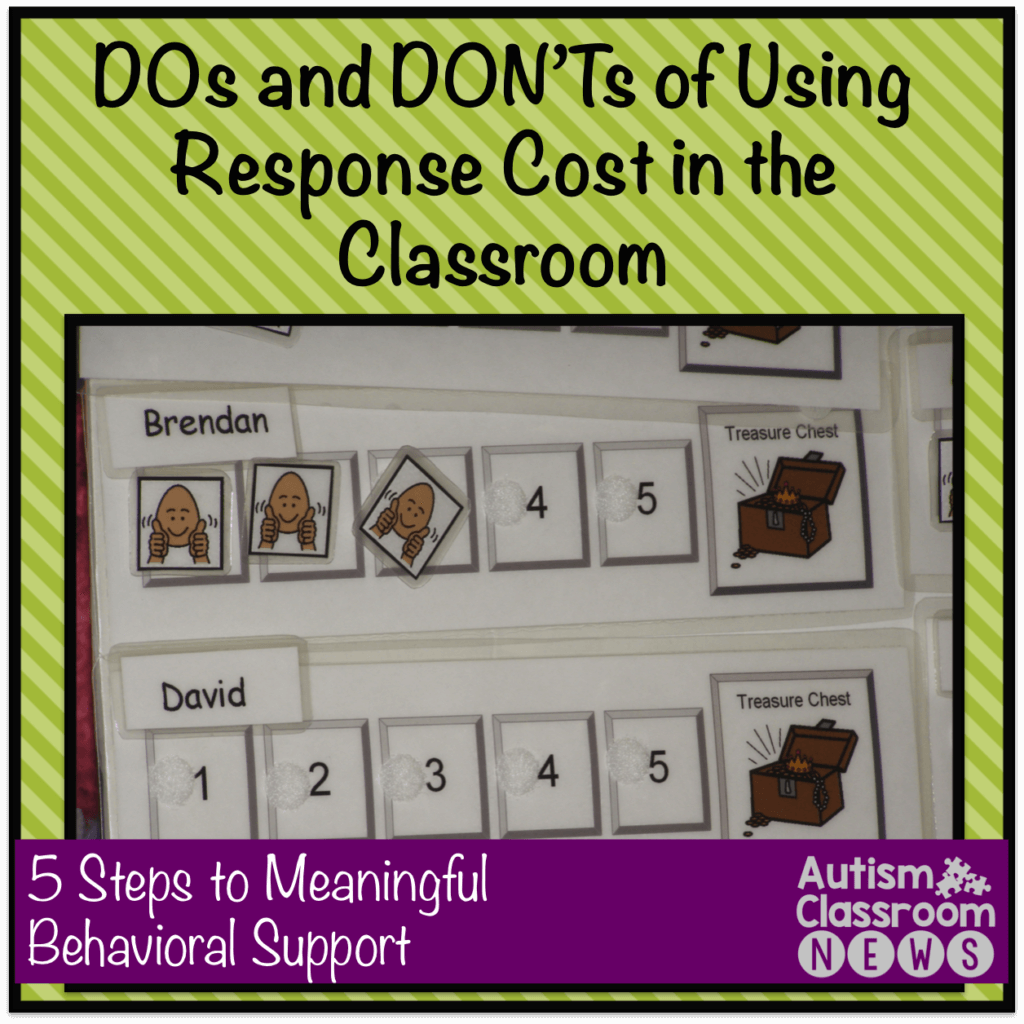 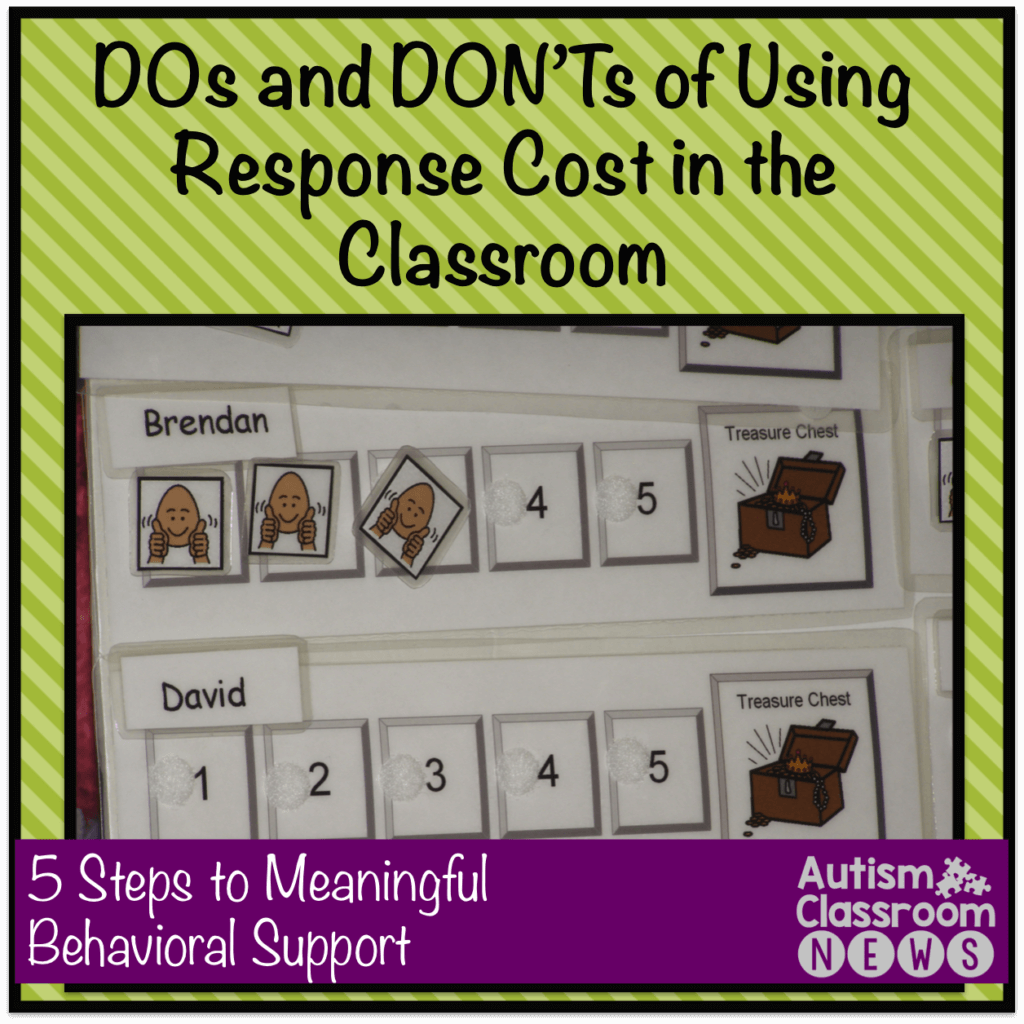 As I said in the last post, it’s important to use your FBA to determine what kind of consequence is going to be effective.  One kind of consequence we often use when we have a reinforcement system, like a token system, in place is response cost.  Response cost is when we remove a reinforcer or an opportunity for a reinforcer from the student in response to a challenging behavior.  It can be used in many different ways, but probably the most common is when the student is earning tokens in a token system and we remove them when we observe the behavior we are trying to decrease.  In our society we are prone to take things away as a punishment for misbehavior, which makes many people think that response cost is a natural to include in the use of a reinforcement system (i.e., you earn when you’re good, you lose when you’re not).  However, response cost often can come back and bite you if you aren’t careful. So, I thought I would take some time to discuss some DOs and Don’ts about using response cost with students.  These are relevant to any population from typical individuals to those with behavior disorders and of course those with ASD. 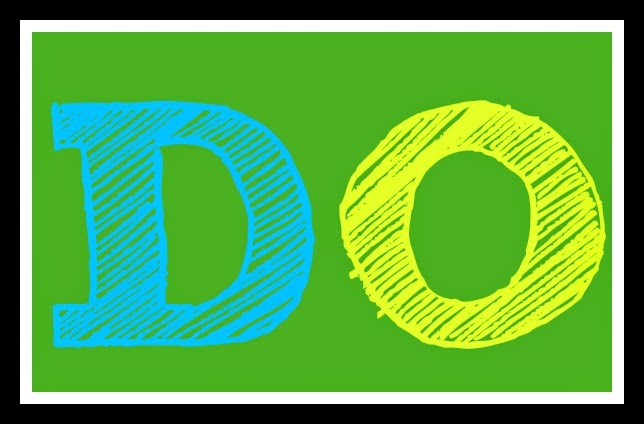 1.  Only use response cost systems as part of an overall positive reinforcement system.

A system in which the someone only loses things is not going to change behavior.  It is going to backfire and probably create more challenging behavior because there is no motivation to stop.

2.  Give more than you receive

If you set up a system in which the student earns reinforcers through tokens, make sure that you are reinforcing more frequently than taking away.  Remember that reinforcement (praising and giving tokens for appropriate behaviors) holds up the correct behavior.  Response cost only tells the student what NOT to do; it doesn’t help the student know what to do instead. 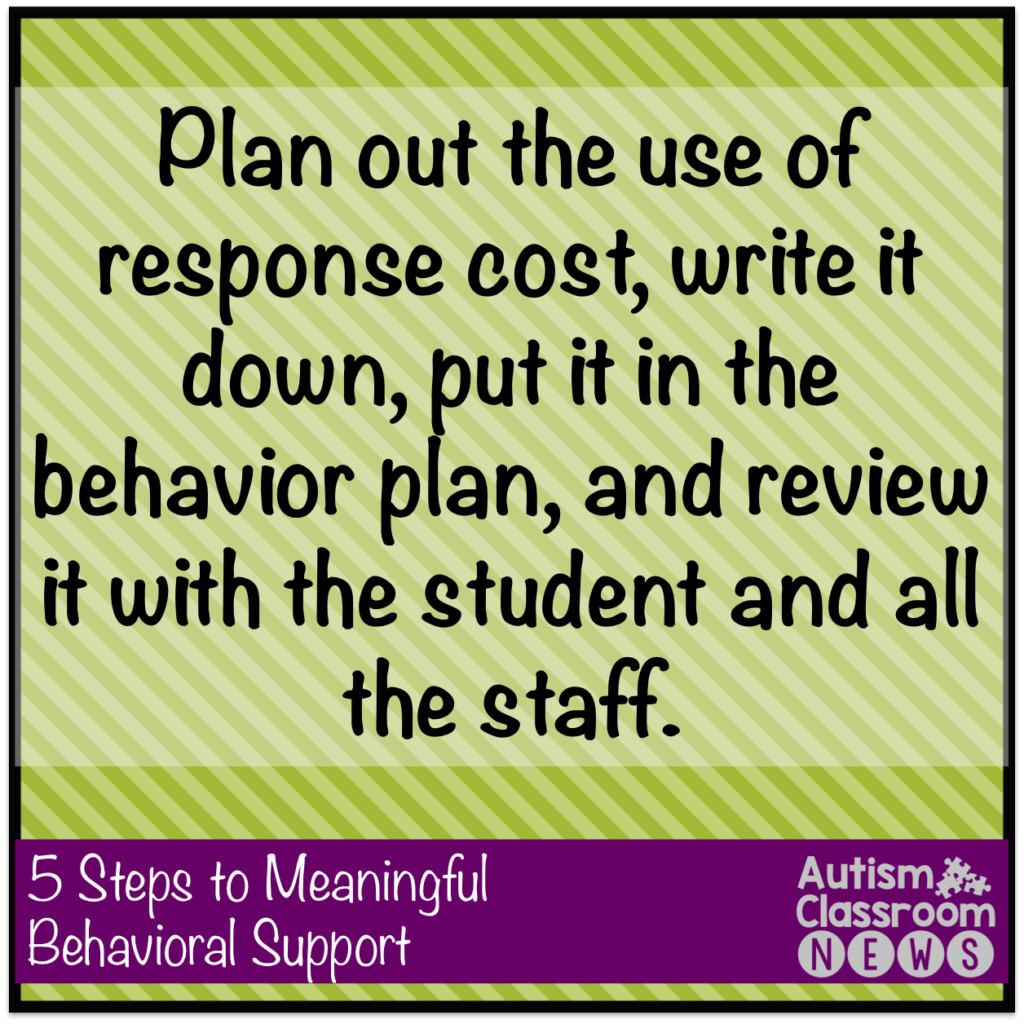 3.  Plan out ahead of time the costs and define the behaviors they are used for

Decide at the start whether to use response cost and put it in the plan so everyone knows how it works, including the student.  Clearly define the behaviors that will result in loss of tokens and share it with the rest of the team.  This makes sure that everyone is on the same page and that everyone who implements it knows when using the token system whether to take tokens away or not before you start implementation.  Determine if you are going to give warnings and make sure everyone is committed to carrying it out that way.  Without that information, the plan will be inconsistent in the implementation and you will not get good results.

4.  Communicate how it works to the student

5.  Make the cost appropriate for the misbehavior

Let’s say you have a student whose aggression towards other students is what you are trying to decrease.  You are reinforcing him with tokens for appropriate behaviors towards other students and for demonstrating appropriate behaviors towards peers and adults. You see him poke another student with his index finger.  Removing all his tokens for this offense is going to sabotage the system and he is not going to continue to count on the system to work for him.  Removing one token might be appropriate and won’t break the system. 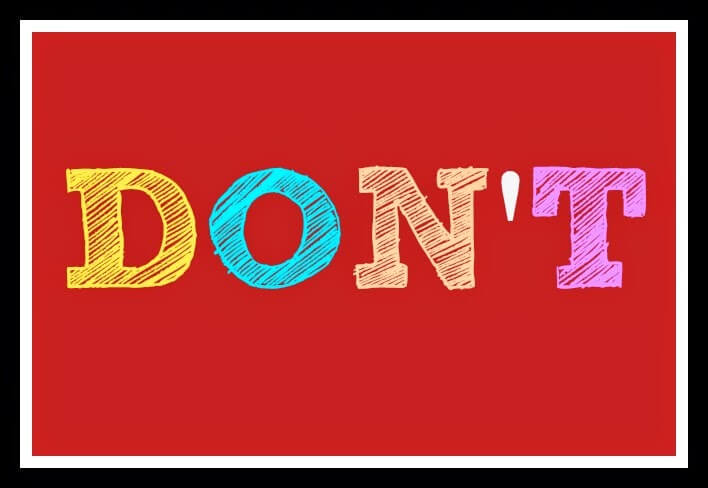 Waiting to either reinforce with tokens or remove tokens for problems makes it unclear what behavior it relates to.  It makes it possible that you are reinforcing or punishing a behavior that isn’t what you are targeting.  For instance, if Wendy earns tokens for saying nice things to friends and loses them for calling them names, if she calls the kid next to her an idiot and the teacher doesn’t come over and remove the token from her system immediately.  A few minutes later, Wendy tells the girl next to her that she really likes her hair and then the teacher gets to her desk and removes the token.  This punishes the nice thing she said, instead of the negative one.  While occasional delays may be mitigated by having the student understand behaviors that get reinforced or punished, patterns of this will kill the system.

Make sure that everyone who is implementing the response cost can calmly simply remove the token from the system or administer the fine without being emotional about it.  Don’t yell at the student or even call attention, in most cases, to the behavior.  If you feel you must call attention to the behavior, use a simple statement that is delivered calmly and quietly.  Also make sure that staff or families don’t remove more tokens than is called for in the plan.

If you have established in the plan whether to give warnings or not, this will be addressed ahead of time.  Giving multiple warnings makes it more difficult for the student to trust how the program will be implemented and that it will be implemented consistently.  If tokens get removed in a way that doesn’t follow the program, the student won’t expect that the reinforcers will be provided consistently either. 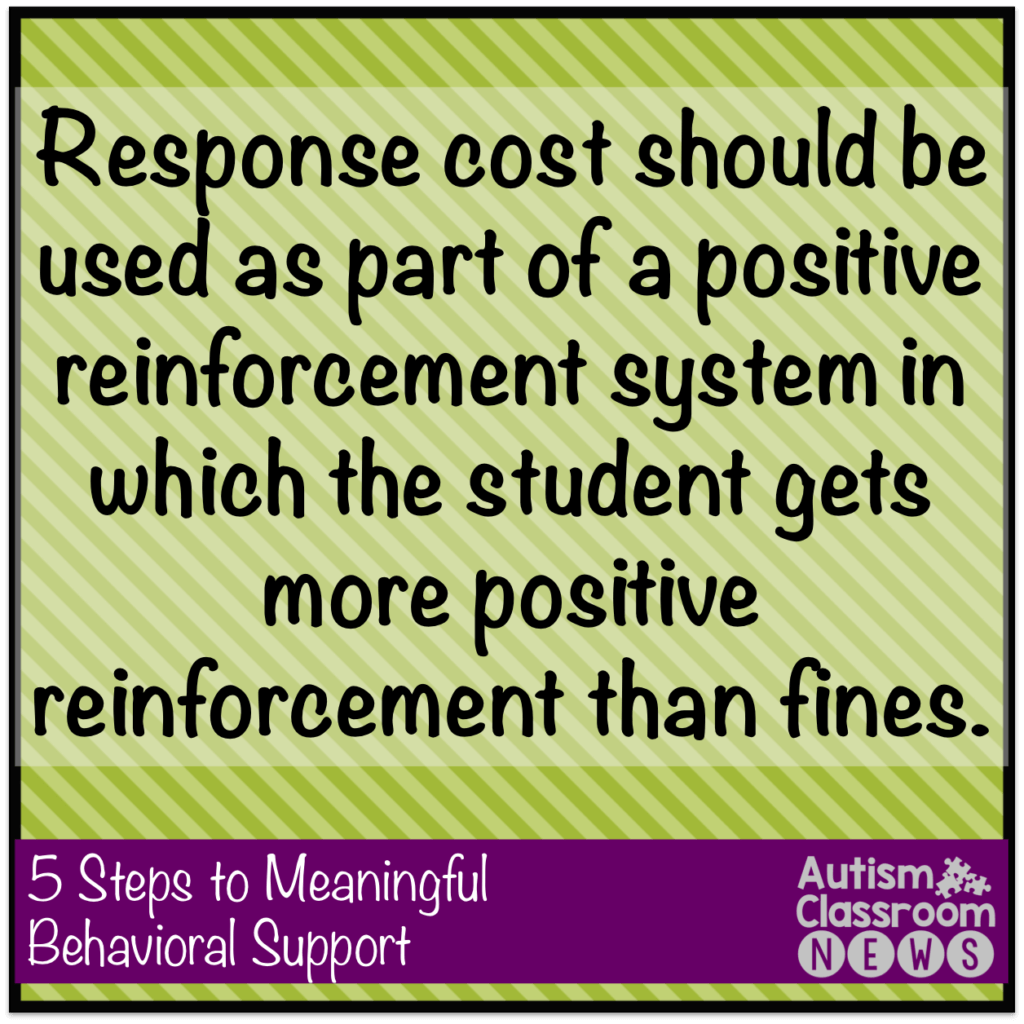 4.  Allow the student to go into a negative balance

If the student loses more than he wins, he will give up on the system and it won’t be effective.  Follow the plan you have set out, but if you find that the student is losing more than he gains, you need to adjust the plan.  Students need to win more than they lose with the system in order for it to stay effective.  Sometimes you may want to start a simpler system (like a token board) with some tokens to prime the system so that there is something that the student can lose.  Students with more complex learning needs are going to have difficulty understanding having a negative balance, so priming the system (like starting a 20-token system with 4 tokens on it at the beginning of the day) will reduce the chances of that happening.  Just be consistent in doing it and make changes to the system planfully based on the data.

5.  Continue a plan that isn’t working

Take data on the system to assess if it is effective.  You can keep track of the tokens as a way to see if the student is getting reinforced regularly and make sure that you have it set up so that the student is getting some level of reinforcement at least 75% of the time.  If not, then reduce the number of tokens needed to get the overall reinforcer.  Also make sure that the reinforcers he or she is earning with the system continue to be reinforcing.  For more ideas on how to make sure you have effective reinforcers for the student, check out this post.

If you are looking to use some token systems, you can find some free ones in my TPT store and for more variety check these out as well. 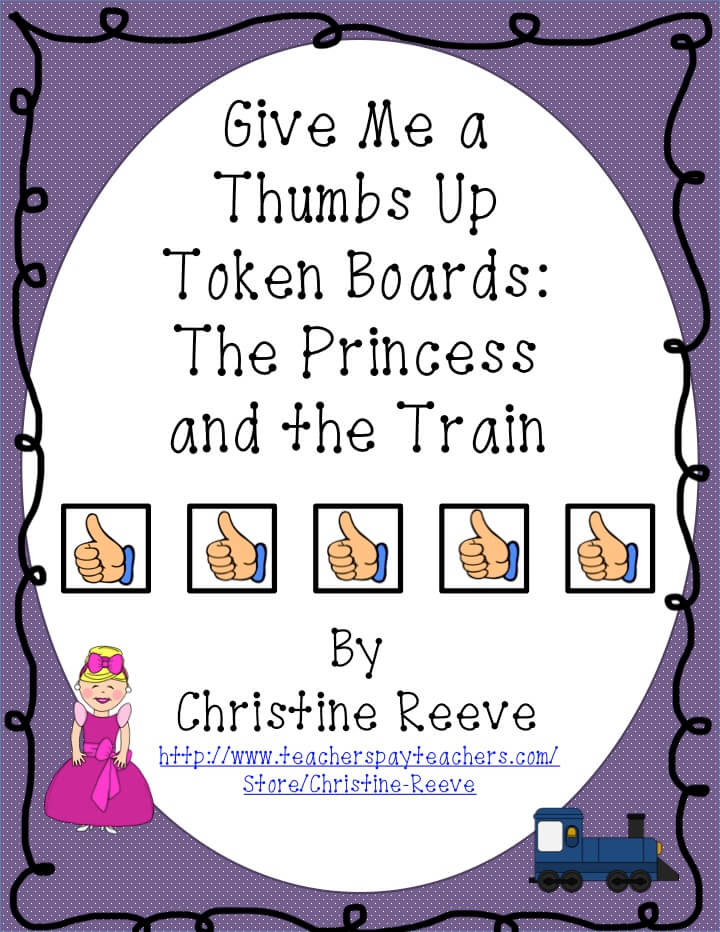 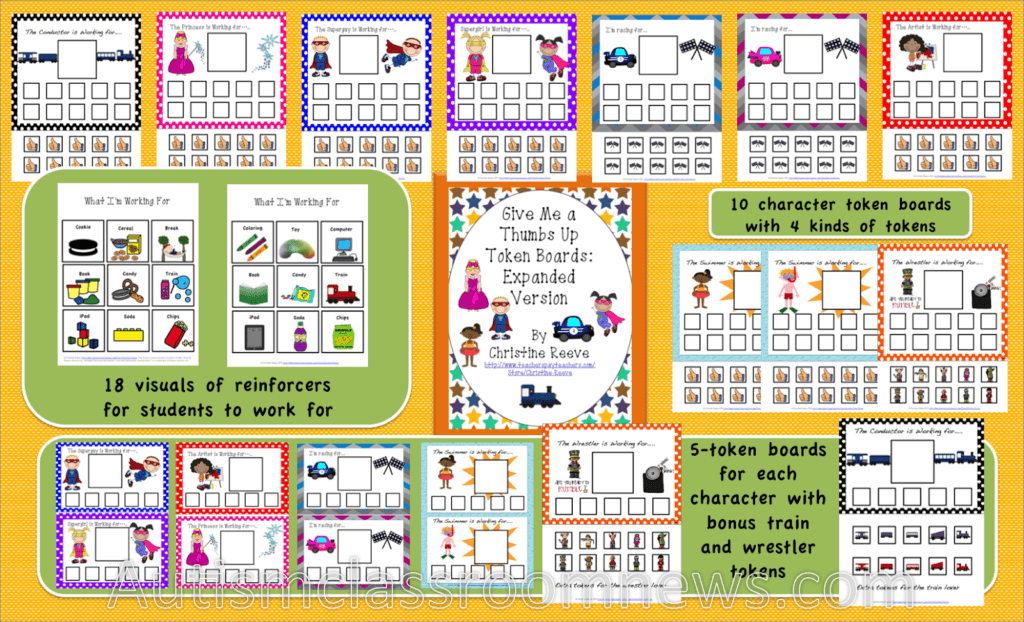